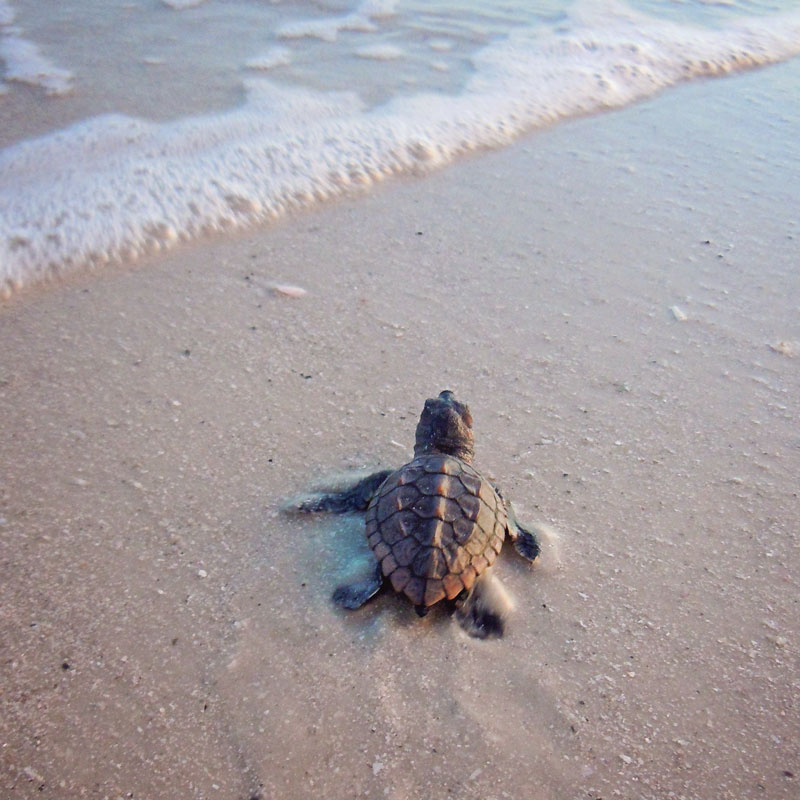 Each summer, something remarkable happens along our Florida coastline. Loggerhead sea turtles travel hundreds, even thousands of miles, to return to the same beaches where they hatched. During the night, these majestic creatures crawl ashore making their way to the dunes to lay their eggs.

A female turtle, weighing several hundred pounds, may spend more than an hour digging a deep egg chamber with her rear flippers. She then deposits 100 or more leathery Ping-Pong ball sized eggs into the nest. Using her front and rear flippers, she carefully covers the eggs with sand, flings more sand over the entire nest site and returns to the sea, leaving the future hatchlings to fend for themselves.

After approximately two-months, tiny hatchlings emerge from the sand at night and scramble to the water. The hatchlings follow the light of the open seaward horizon to find their way. Sadly, lights from buildings and streets can disrupt their sea-finding ability. Confused and lost, they wander inland, where they are at risk of being crushed by vehicles, eaten by birds or perishing from heat exhaustion in the sunlight.

Most adult loggerhead sea turtles nest every other year, laying several clutches of eggs during a nesting season. Only a few hatchlings survive to adulthood!

A Danger of Extinction

Sea turtles have had a crucial role in maintaining the health of the world’s oceans for more than 150 million years. Tragically, all sea turtle species are being pushed toward extinction by human actions. Coastal development, loss of habitat, pollution, artificial lights on nesting beaches, drowning in shrimp nets and other fishing gear, monofilament entanglement and boating-related accidents all have contributed to their significant decline. In the U.S., the Endangered Species Act (ESA) along with State and local laws protect sea turtles and their habitat – but your support is critically important to their survival.

Learn How You Can Help