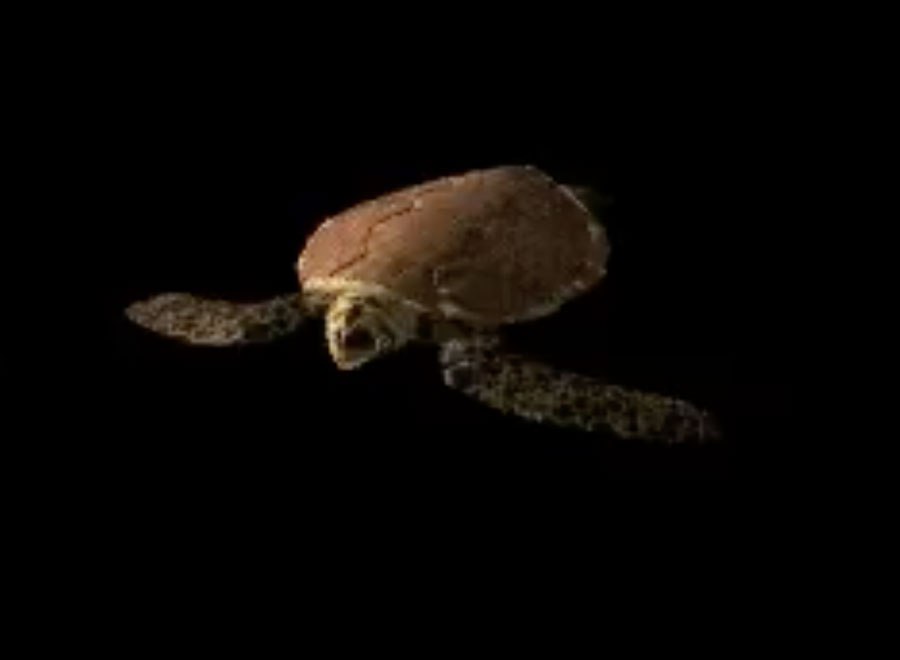 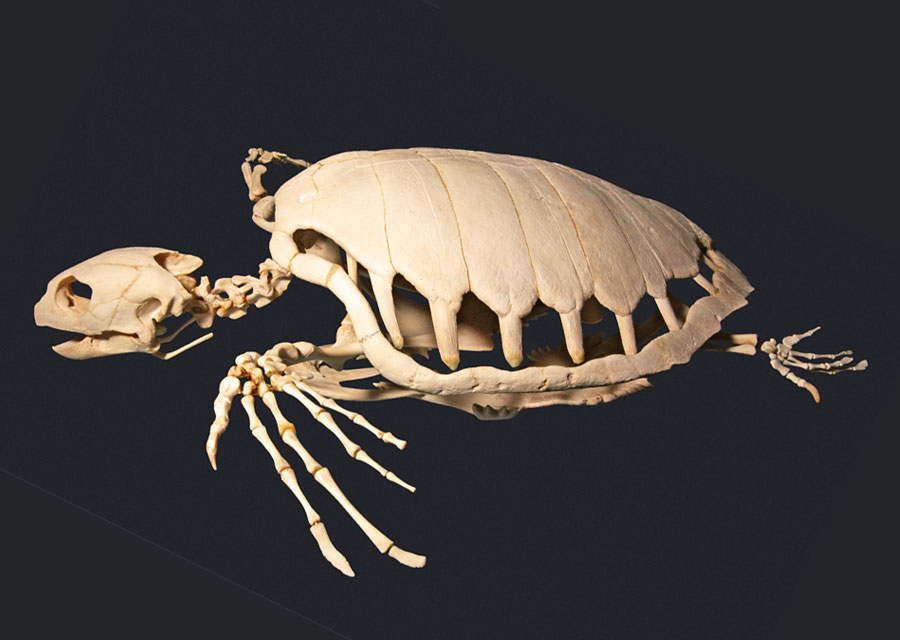 The anatomy of the sea turtle is unique in that it is one of the few creatures to have both an internal and external skeleton. In all species except the leatherback, the external skeleton, whose main purpose is to provide protection and support for internal organs, is comprised of a bony shell which is, itself, divided into two halves: the lower plastron and the upper carapace. The carapace is actually the broadened, fused ribs of the turtle and is covered by a series of firm but pliant structures called scutes. As you might have guessed, there are several types of scutes based on their position on the carapace. They are the nuchal scute, located at the forward edge of the carapace, the vertebral scutes that run down the middle, the costal scutes, which are right next to the vertebral scutes, and the marginal scutes that line the outer edge. The scutes are often used to distinguish one turtle species from another by counting the number of each type of scute.

The internal skeleton provides an anchor for the turtles’ muscles. With the exception of the leatherback, the spine is fused to the carapace. The long digits in the limbs of the turtle are fused together to form the flipper.

The flippers themselves are large and sensitive to touch. The front flippers propel the turtles through the water as they’re moved in a figure-eight pattern. The rear flippers act as rudders, providing both direction and stability to the turtles’ motion. They are also used by females to dig the egg cavity during nesting.

The mouths of sea turtles contain no teeth. Instead, they are sharp and beak-like and are well-suited for crushing or tearing their food. The leatherback’s mouth contains a series of backward pointing spines that prevent jellyfish from slipping back into the water.

The eyes of sea turtles provide them with good underwater vision, but are less useful above the water’s surface where they give the turtle a near-sighted view of the world. There is a gland near the eye that releases excess salt and fluids in order to keep the eyes moist when females are on land and also to help the turtle rid itself of the salt it ingests when drinking sea water. These glands are responsible for the tears a turtle sheds while laying its nest. Legend has it that the female turtle is crying for its unborn young. Science, however, provides us with a more biological answer.

Although turtles do not have ears, they are capable of perceiving low frequency sounds and vibrations. One of the turtle’s gifts is its powerful sense of smell. This sense may help sea turtles locate the beach from which they were hatched in order to deposit their own nests.

In most respects, the males and females of the various turtle species have few physical differences on the outside. One obvious distinction is the size of their tails. Female’s tails are short and do not extend beyond the hind flippers. However, the tails of the males are considerably larger and usually extend well past the hind limbs. Additionally, only the female has an ovipositor, the structure used to deposit her burden of eggs.

As was already stated, the spine of the leatherback, unlike the other species, is not fused with its carapace, nor does it have a bony shell. Instead, it is covered with a leathery skin supported by a mosaic of tiny bones. These adaptations allow it to dive up to three thousand feet below the ocean surface, where the tremendous water pressure would crush a less flexible body.